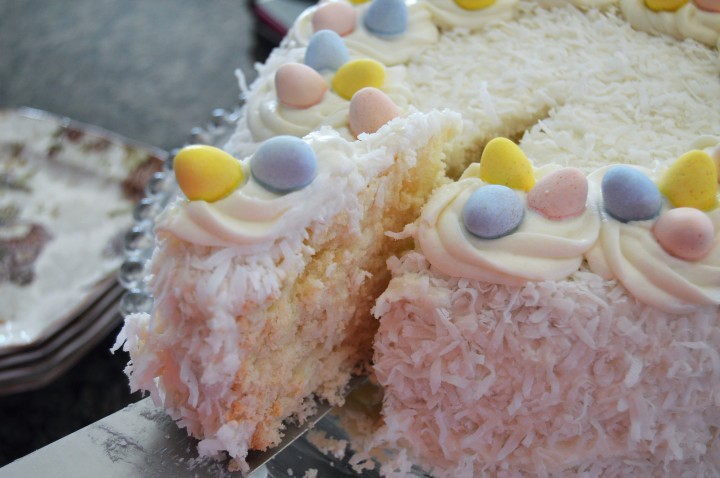 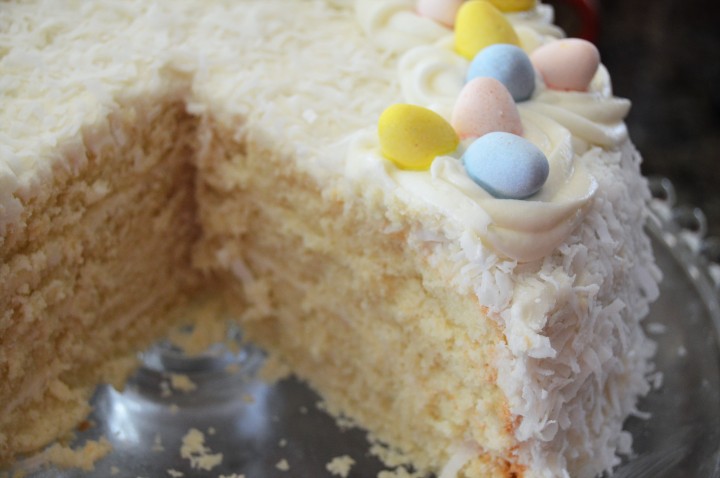 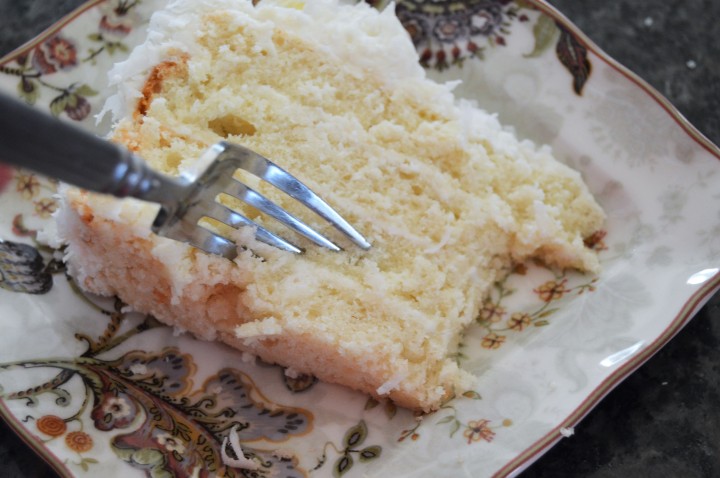 I have made quite a few different cakes, but this one is definitely my favorite so far. This was the third time I’ve made it and each time it went over really well. It’s light and airy, so it’s a perfect choice for spring.

As you can probably tell by the little Easter eggs on top that I made this for Easter, I actually wanted to have this up before Easter but since I made it the night before it really wasn’t practical.

In a medium-sized bowl sift together the flour and the baking powder, and set aside.

In a large mixing bowl, cream together the butter and sugar until fluffy. Add the vegetable oil and the two egg yolks, mixing between each addition. (Be sure to save the two egg whites for later.) Then add the vanilla and the almond extracts, and mix until well combined.

Next up, add the coconut milk and the flour alternating between the two, adding half the milk then half the flour and so on.

In a separate bowl beat the cream of tartar and 4 egg whites, plus the two from earlier until the mixture is stiff but not dry.

Then add the egg whites to the cake batter and fold in as gently as you can until the whites are completely mixed in.

Divide the cake batter between the two prepared pans and bake for about 20 minutes or until a toothpick comes out with just a couple of crumbs on it.

I divided each cake in half to make four layers, but you can do it whichever way you like.

When I say coconut cream, I mean the solid cream that forms on the surface of the liquid in the can.

Beat together the butter and the coconut cream until smooth, then add the vanilla.

Add the powdered sugar two cups at a time, mixing slowly between each addition. You might need more or less powdered sugar depending on how you like your frosting.

Now fill and frost the cake!

Once the cake is frosted the way you want it, coat it with coconut flakes.

I have really missed doing baking post, so I’m hoping to get back into doing them more often.

What is your favorite kind of cake?